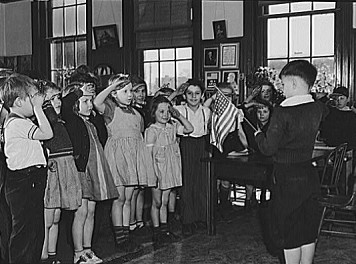 On Wednesday, Sep. 14, 2005, a federal judge from the Eastern District of California ruled that it was unconstitutional to recite the Pledge of Allegiance in public schools. According to David Kravets of Associated Press News:

“Reciting the Pledge of Allegiance in public schools was ruled unconstitutional Wednesday by a federal judge who granted legal standing to two families represented by an atheist who lost his previous battle before the U.S. Supreme Court.

U.S. District Judge Lawrence Karlton ruled that the pledge’s reference to one nation ‘under God’ violates school children’s right to be ‘free from a coercive requirement to affirm God.’

Karlton said he was bound by precedent of the 9th U.S. circuit Court of Appeals, which in 2002 ruled in favor of Sacramento atheist Michael Newdow that the pledge is unconstitutional when recited in public schools.

Karlton, ruling in Sacramento, said he would sign a restraining order preventing the recitation of the pledge at the Elk Grove Unified, Rio Linda and Elverta Joint Elementary school districts, where the plaintiffs’ children attend.

The decision sets up another showdown over the pledge in schools.

The Becket Fund, a religious rights group that is a party to the case, said it would immediately appeal the case to the San Francisco-based 9th U.S. Circuit Court of Appeals. If the court does not change its precedent, the group would go to the Supreme Court.”

See the full text of Judge Karlton’s ruling. (in PDF format)
The scope of this case was reduced on July 18, 2005 to include only the legality of reciting the pledge in public schools.

RELATED LINKS:
1. Get a history of the Pledge.
2. See Newdow v. US Congress and Newdow v. Carey
See readers’ reactions to this decision.

ProCon.org is a 501(c)(3) nonprofit
public charity supported by your donations.